How does Steem work, anyway?

There’s a lot of information about how Steem works on the surface (the blue paper is a nice start), but it’s hard to find information if you want to dig deeper. For example, if you google how much an upvote is worth and where that money is actually coming from, the explanations barely go beyond that it’s somehow connected to the amount of Steem Power (SP) you have. You’re out of luck because there’s no technical specification.

This post summarizes my findings and I hope it can clear up some things about the actual computation of rewards.

Where does the money come from?

Like in any other blockchain, new STEEM tokens are created in a block every 3 seconds.

The rate at which new STEEM tokens are created started with 9.5% per year in December 2016, decreasing at about 0.5% per year, until 0.95% inflation is achieved. Right now this means about 1.668 STEEM is created each block (3 seconds).

These STEEM tokens are then distributed to the community (content creators, witnesses = elected block producers, curators) in a specific way: 75% goes towards the rewards pool, 15% to vested token holders (people holding SP), 10% to witnesses.

Intuitively, the rewards pool consists of the money that gets distributed to the people either writing posts or curating content (finding quality posts). Whenever someone’s post is upvoted he gets a small share from that reward pool. 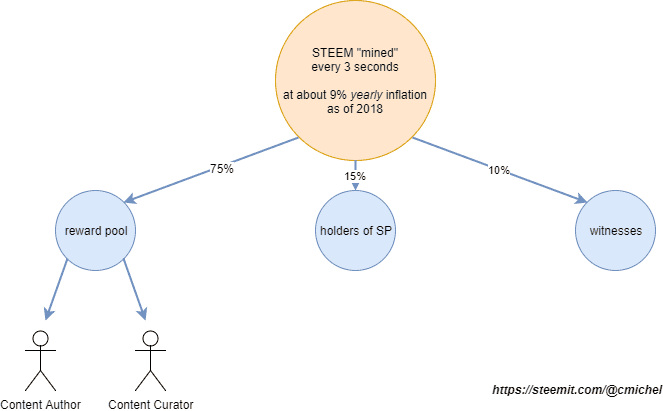 So how much is an upvote worth? It’s clear that it depends on the amount of STEEM tokens in the rewards pool, but it depends on a lot of other things. We first have to look at the different currencies of the Steem blockchain:

This is the main token being traded on the exchanges.
Obtained through: Exchange. Powering down SP over 13 weeks. Internal market.

Steem Power symbolizes how much influence you have on the Steemit platform. One SP has the same value as one STEEM, however, SP is much less liquid. You need to convert it to STEEM over 13 payments for 13 weeks.

SP is designed to encourage long-term holding rather than short-term selling. This encourages more users to have a vested interest in the long-term success of the platform. - Steem Whitepaper

So why should you hold SP instead of STEEM if it’s less liquid? The more SP you have the more “invested” you are in the platform, and all calculations, like curation rewards or how much an upvote is worth, is solely based on your SP. You can also counter-act the 10% STEEM inflation each year because as described earlier currently 15% of the mined STEEM tokens each block are distributed among the SP holders.
Obtained through: Powering up STEEM. Lending (receiving delegations) from other steemians.

They are designed to be a stable currency that you can sell at any time. They’re supposed to be tightly coupled to the USD, so 1 SBD = 1 USD. (This is not the case right now.)

When a post receives a payout it takes the form of 50% SBD and 50% SP. Users also have the option to be paid in 100% SP, as well as decline payout on posts. When a user declines payout on a post, the money that would have been paid to them remains in the rewards pool, to be distributed to other users. - Steem Whitepaper

Obtained through: Rewarded by contributing to the platform. Internal market. 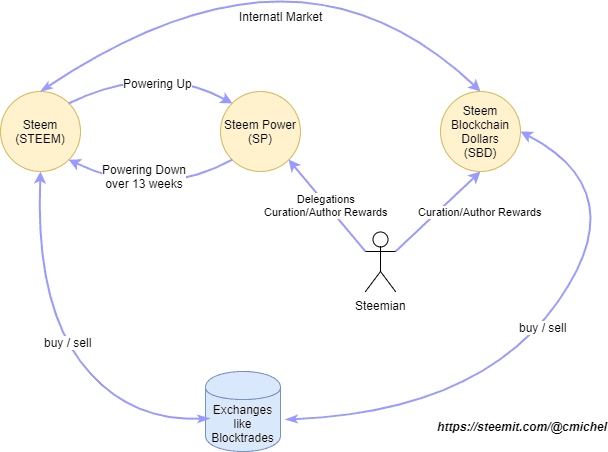 So with this info, we know that the only token that influences the payouts from the reward pool is Steem Power.

What does the payout of an upvote depend on?

The witnesses publish a price feed “voting” how much a STEEM token is worth. Steem Center describes it the following way:

Accordingly to the @teamsteem, the price feed is used by the Steem blockchain when it calculates how many SBD it owes for its author rewards. It is also the price feed that is used to calculate the worth in $US displayed in the wallet.

The number of vests you get for your SP

Steem Power is internally converted to vests when it’s used for calculations. How much SP you need for a million vests is given by the global blockchain parameter steem_per_mvests. You can always check the blockchain parameters (and the witnesses’ price feeds) on steemd. This step is not that important for understanding, you’re just converting SP to a different unit.

The higher your Vote Power (and Vote Weight), the higher the payout of your vote. So it’s best to keep your Vote Power always at 100% and spread out your votes over the day if you want to maximize your upvote’s value.

Your Vote Power can be seen on sites like steemd or steemworld. 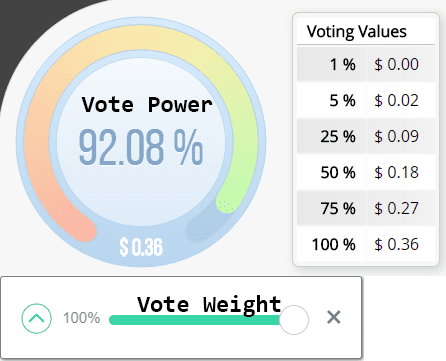 The reward pool and recent payouts

The rewards pool is just the accumulated STEEM generated in each block, so there’s an (almost) constant steady increase of it. The recent claims are intuitively the money that was payed out as author and curation rewards. Posts are paid out after 7 days, so this value can fluctuate.

(These numbers can again be seen on the right table on steemd.)

The value of an upvote is then multiplied by this quotient reward_balance / recent_claims. So the more STEEM is in the pool, the bigger the payout. Conversely, the bigger the recent payouts, the lower your payout.

The formula for computing the worth of an upvote

Finally, we’re ready to programmatically compute the value of a Steem upvote by taking into account all of the above ideas.

Firstly, we retrieve all the blockchain parameters and the median price feed. Then, the value depends on our individual SP, Voting Power, and Voting Weight.

I hope you got a better understanding now how the Steem blockchain actually works. If you don’t want to do the calculation yourself, I can recommend steemworld. It also lets you play around with different SP, VP, VW values, so you can calculate if dumping all your money into Steem is worth it. ;)

Note: We’ve been ignoring curation rewards the whole time and focused only on Author rewards. All this information is accurate as of hard fork 19. Some things might change in the future.