How I gamed EOS Defi projects and still got rekt

Recently, a lot of EOS “Defi yield farming projects” popped up. I put projects in quotes because the common trait among the ones I’m talking about is that there’s no working product - just a project token. Some examples:

They all work the same way: 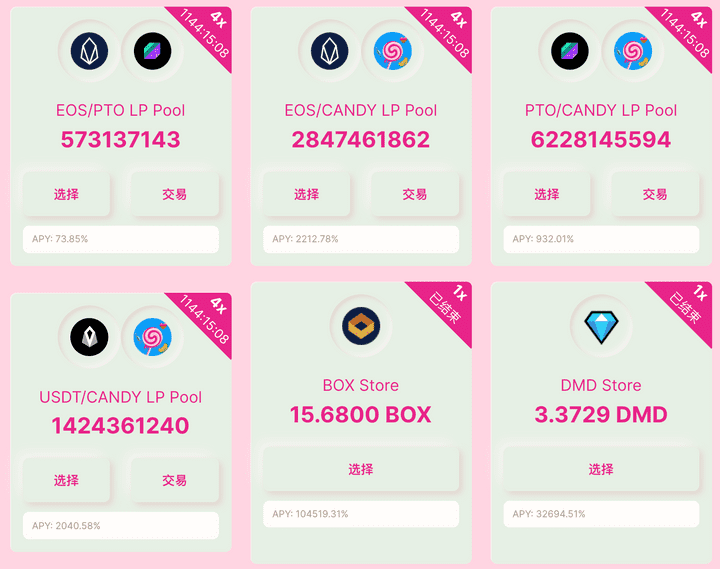 Example of different pools and their APY

How can we exploit this?

As so often with investing, bigger returns come with more risk. Pools that use Liquidity Pool tokens (LP tokens) - especially the ones providing liquidity for the EOS <> PROJECT token pair - come with the highest APY and the most risk. We’d like to find a way to reduce the risk exposure that comes with providing liquidity while still locking in the high APY. For that, let’s see how the mining actually works:

The interesting thing is that the harvest action is implemented in a bad way and only does a spot-check. It doesn’t matter whether one staked tokens in-between mining actions, one just needs to make sure that the tokens are staked to the pool when the mining action is run.

Luckily, some project’s mining actions are simply scheduled to always run at a certain time (for example, every 3 minutes at XXmin30s) instead of being random. We can predict when the next mining action runs on-chain, move tokens to the pool right before it, and move out right after it. The ideal plan would be to:

Some problems I encountered

So I wrote some scripts to test this strategy and came across some problems:

That’s also the reason why I ultimately ended up with a loss: These project tokens are hyperinflationary. The only thing you can do with them is to dump them. The only time they are bought is when someone FOMOs into buying them because they see APYs of more than 10,000%. You might get an expected 10% ROI per day denoted in PROJECT tokens, but the price drops by 20% a day.

It’s fun playing around with these projects but you really need to know what you’re getting into. I’ve made some easy, small profits by staking into an EOS or USDT pool (the only risk for these pools is a hack or a rug pull), but I got rekt as soon as I provided liquidity for these tokens - even while exploiting their mechanics. 😃