Splitting your app into micro-processes

I came up with an interesting way to split my code base that I think can apply to a wide range of projects.

I was currently developing a new app (a bot for steem) and I repeatedly came across the following issues:

In short, there are many things that can go wrong and crash my whole application. I then came up with the following idea: Similar to micro-services, I’ll just create several, what I call micro-processes, that have only one strictly defined task. A micro-process is simply a tiny node app itself.

Why is it helpful? The idea here is better fault isolation - if one micro-process fails, the others continue to work. It also comes with the added benefit of a better separation of concerns. Each micro-process is responsible for only one job, which itself leads to code that is easier to understand and maintain. It allows other open-source members to be productive right away without needing to know the whole application stack.

However, this code split comes with several challenges:

The solution to many of these challenges is (ab-)using lerna. Lerna is a tool for managing multiple packages in a single git repository. The task it tries to solve is to make publishing interdependent packages easy. It’s often used in UI libraries having a lot of custom components that might depend on each other.

While we don’t intend to publish our individual micro-processes to npm, abusing lerna and making each micro-process an individual package still gives us the benefit of bootstrapping all packages: It installs all their dependencies, sym-links the packages that depend on each other, and runs custom scripts for each package.

Then start your app by creating a new folder and initializing it:

This will create a lerna.json file, which you can ignore for now, and create a packages folder where our micro-processes will live. The repo has a global package.json file and each individual package in packages is just another NPM app with its own package.json file.

You can install all build tools and testing scripts in the root package.json. For example, it looks like this if you’re using babel, eslint, prettier and jest:

Creating the broadcaster micro-process is straight-forward. Create a new NPM package named broadcaster under packages and put a package.json with the following contents there:

We define some scripts here:

Note that we’re using private NPM repositories here (indicated by the @name/ before the app name). I never intend to publish these packages to NPM, I just misuse it as a namespace, to keep all my lerna packages for a specific app under the same name.

We create the bot micro-process the same way, with the same scripts.

Now, here’s the great things: When we run lerna bootstrap --hoist, lerna will install all dependencies for the packages, run our prepublish scripts which builds the sources, and sym-link the broadcaster, such that it is just another external dependency for bot. The --hoist flag installs common dependencies of all packages (like dotenv, node-ipc, steem) only once in the lerna root folder’s node_modules. So the dependency is only installed once for the whole app, instead of once for each package.

Here’s the setup that we have so far: 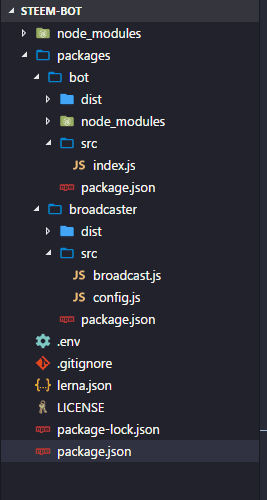 You can check out the code structure on GitHub.

How the processes communicate

We already added node-ipc as a dependency to our packages. It uses local UNIX / Windows sockets for inter-process communication (IPC). There’s one or several servers, and clients that connect to them. Messages can then be broadcasted from a server to all connected clients, or to clients on an individual basis.

In our case, the broadcaster acts as the server to which the bot is connected.

So let’s start with setting up the server in broadcaster/src/broadcast.js to connect to the Steem blockchain and broadcast its transactions to all connected local clients:

We use ipc.server.broadcast(type, data) to broadcast the Steem data by their type, i.e., connected clients can choose to listen only to certain types like comment or vote.

We can then process the messages in bot/src/index.js:

Starting all the micro-processes by hand is tedious, so we use a node process manager. I like PM2 because of its simplicity and nice features: You can define which npm scripts to run on which packages in a config file, and it automatically restarts crashed processes.

We create a config file pm2.json in the lerna root directory that starts our two micro-processes with their start command:

Our workflow now looks like this: Build all the packages by running:

Start the micro-processes by running:

And you’re done. You have a robust self-healing swarm of communicating node processes. 🤖🤖🤖
I created a GitHub repo with this boilerplate.