Whether a side of a face is considered to be the front or the back, depends on the winding order the game engine uses.

Consider you have a triangle (the same idea works for any polygon) and you start by picking any vertex (call this vertex 1). Then you can pick up the other vertices from your point of view in either a clockwise or counter-clockwise order. The way you do this is called the winding order of the triangle. 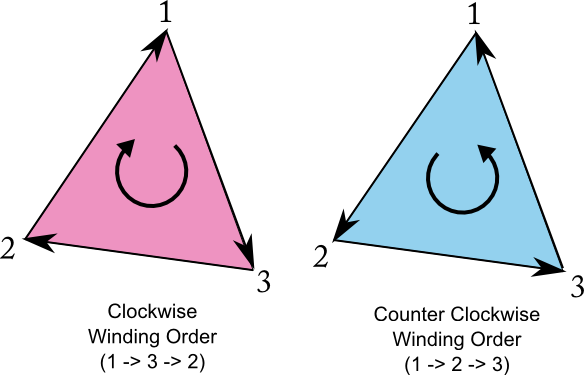 What about the normal of the face?

The normal has nothing to do with determining the front/back of a face. There is (unfortunately) no rule that says that the normal always has to face towards the front. However, it would make sense as the normal is usually used for determinig the amount of light the face will receive. For example in the Phong Illumination Model the more similiar the normal N is to the vector L, going from the face to the light, the brighter it will be.

You can calculate “the” normal of a triangle by taking the cross product of its first edge u (1 -> 2) and second edge v (1->3). The reason why I put “the” in quotes is because normals can not only have different magnitudes (let’s normalize it to have unit length for now), but more severe its direction is not unique. Reflecting the normal along the face will yield another normal with a different direction. Let’s say we want the normal to face in the front direction, whatever that means, depending on the winding order your engine uses. Then the cross product of u and v yields the normal according to the Right-Hand-Rule. If you look up Unity’s documentation for Vector3.Cross, you see Unity uses a left-hand-coordinate system, so the direction will be according to the Left-Hand-Rule. 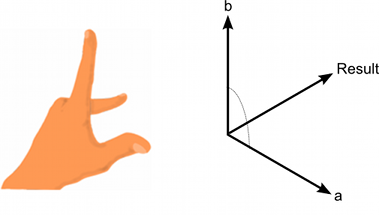 Here is some code you can use in Unity that will yield a front-facing normal, depending on the winding order of the mesh you provide.